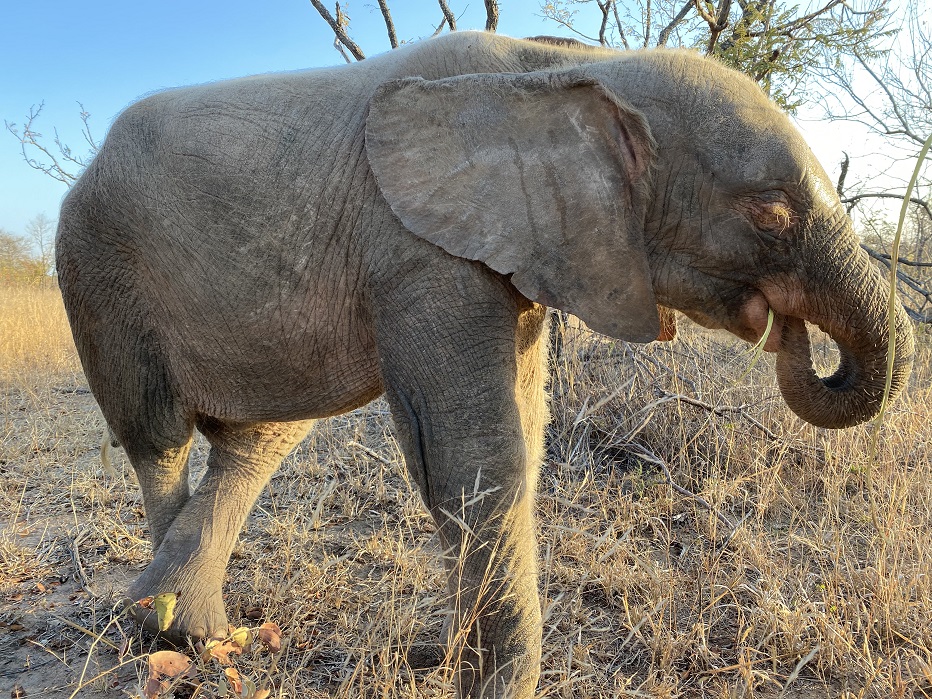 It takes guts to raise a baby elephant… | Elephant Digestion

It takes nerves of steel and sometimes, when the little pachyderm is tugging on your tail or the rains just won’t come, it takes patience and a cool head. It also requires the transfer of symbiotic microbial bacteria from the gut of the mother to the gut of the elephant calf.

These wanderers of the African plains and forests prefer a diet of lush green grasses with occasional fruity snacks that are available during the warm wet season, however for much of the year less nutritious stems, roots and bark are consumed. In other words they graze during the wet season and browse during the dry season when up to 94% of their diet consists of indigestible and difficult to swallow material.

Fortunately, their giant molars are perfect for grinding the bark and stems into a more manageable, and ultimately, a more swallowable state. Unlike giraffes, who use their prehensile blue tongues to grasp delicious leaves from far out of reach places, African elephants cannot stick their tongues out at you because the underside is connected to the floor of the mouth.

The tongue, which can weigh up to 12 kilograms, aids in moving food to the back of the throat where, mixed with saliva, it is easily slid down the mucous-lined oesophagus into a simple one chamber stomach.

African elephants are generalised feeders and their digestive strategy requires them to consume large amounts of low quality forage. They feed for up to 18 hours a day and depending on the quality of the food can digest as little as 22% of that with the remainder being excreted.

African elephants, along with all vertebrates, are unable to digest the major component of the cell walls of plants which is cellulose and therefore many rely on anaerobic microbes or gut bacteria to, through fermentation, convert their forage into a digestible form.

By far, the majority of the world’s hoofed herbivores or ungulates are ruminants and these have, almost without exception, an even amount of toes. Some, like the camel have large toe nails rather than hoofs and others, like the giraffe have what looks like a split hoof, but they all fit into the category of even-toed ungulates and they all have a stomach divided into, usually, four chambers.

Utilising these divisions allows them to swallow their food hastily and later, perhaps in a safer environment, to regurgitate their food and chew the cud. This is called rumination. This chewing helps with the breakdown of the tough cellulose which is then fermented by bacteria in one of those chambers (the rumen) and converted into volatile fatty acids. These ruminants are known as fore-gut fermenters and include impala, wildebeest, antelope, giraffe as well as domesticated cattle.

Probably because animals “chewing the cud” or ruminating often look like they are lost in thought, the word “ruminate” has taken on the meaning ‘to ponder’ or to think deeply. Giraffes are probably just wondering about how to regurgitate the ball of leaves all the way from their stomach to their mouth for more chewing.

On the other hand (or foot), odd-toed ungulates such as rhinos, zebras, horses and asses as well as tapirs and elephants are hind-gut fermenters, which means that the fermentation necessary to convert the branches, stems and bark into absorbable and nutritious sludge takes place, not in the stomach, which acts mainly as a storage container, but in the large colon and caecum.

This hind-gut fermenting group of ungulates is significantly smaller than the fore-gut fermenters, possibly because rumination and fore-gut fermentation is generally considered to be far more efficient means of digestion. Hind-gut fermentation does however have the benefit of allowing animals to survive on large amounts of low-quality forage which they process more rapidly than would be possible for a similarly sized ruminant.

This is also a possible explanation for the size of both elephants and rhinos as their digestion strategy of almost constantly eating large amounts of low-grade forage that is digested relatively quickly is thought to be what allows them to occupy their giant dietary niche in the animal kingdom.

This difference in ability and preference between hind-gut and fore-gut fermenters is also what allows the vast herds of zebra and wildebeest to successfully negotiate the great Serengeti migration as their dietary needs might overlap but never clash.

The largest of all land animals, the African elephant, consumes over 150kg of assorted plant material per day with the major portion being excreted as fecal matter in the form of boluses, a short cylinder of dung whose dimensions reflect those of the rectum.

Those interested in elephant behaviour can judge the size and age of any elephant based on the dung it has left behind. Perhaps not the most sought-after job, looking through elephant dung, but because of the low digestion a lot of information regarding their diet and eating habits can be gleaned from these droppings, including stress levels and what the elephant had for breakfast.

The majority of whatever an African elephant eats, seeds and all, is likely to be deposited many many kilometres away roughly 22 hours later.

Studies using indigestible rubber rings, orange peels or chromium-mordanted fibres, show this mean retention time (MRT) or, in other words, the length of time it takes for ingested food to travel from trunk to tail.

This spreading of thousands of kilograms of seed-filled balls of semi-digested plant matter over vast distances every year is a vital contribution to their regional ecology.

The difficult job of raising the next generation requires that fermenting microbes be passed from mother to child. When the elephant calf is born it has no gut bacteria and while milk-digesting bacteria will arrive with the milk, plant-digesting microbes can only be obtained by eating delicious elephant dung obtained from either it’s mother or other herd members.

Raising an elephant calf requires not only making sure that it eats a healthy balanced diet of plants, but has regular access to poop too. 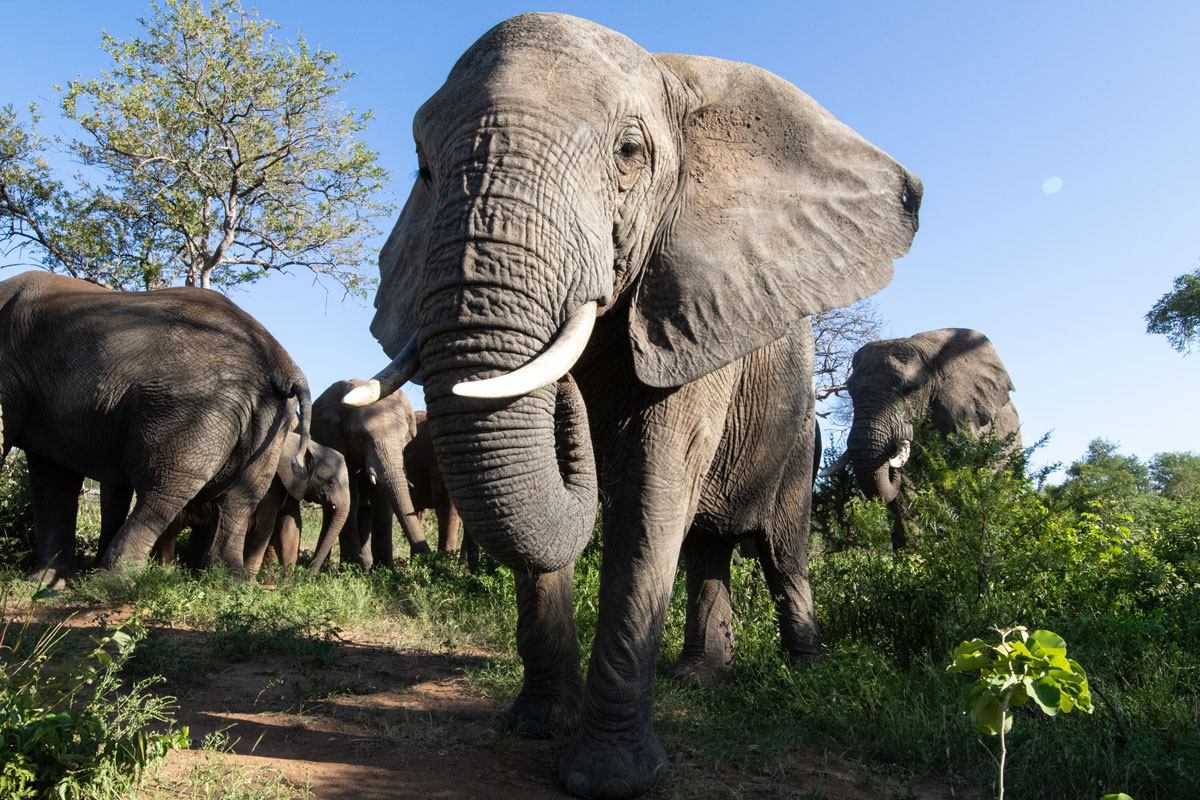 Meet Tokwe: The Elephants’ Matriarch & Mother of the Herd 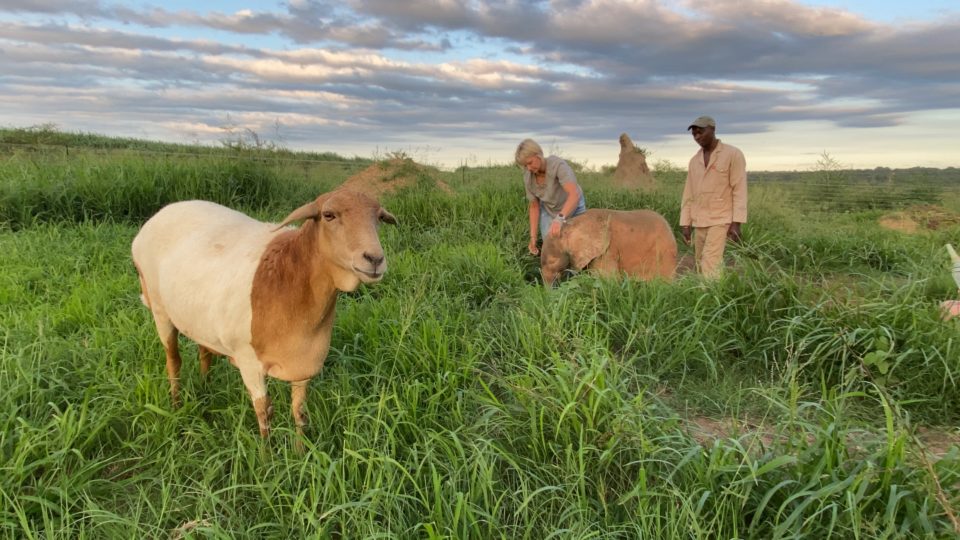 Lammie the Loving Legend Gets a Haircut 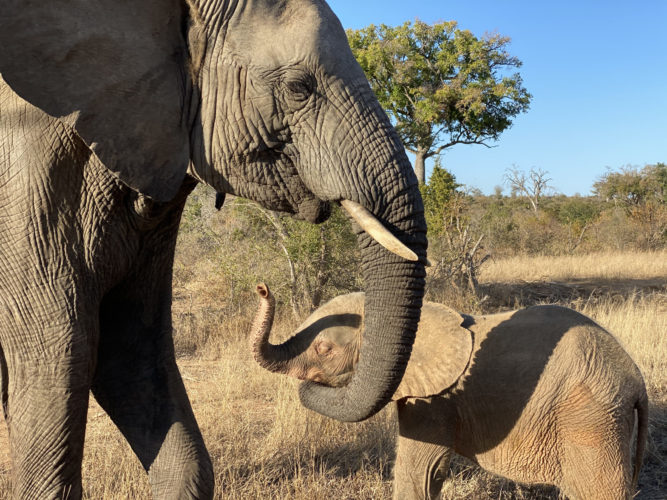