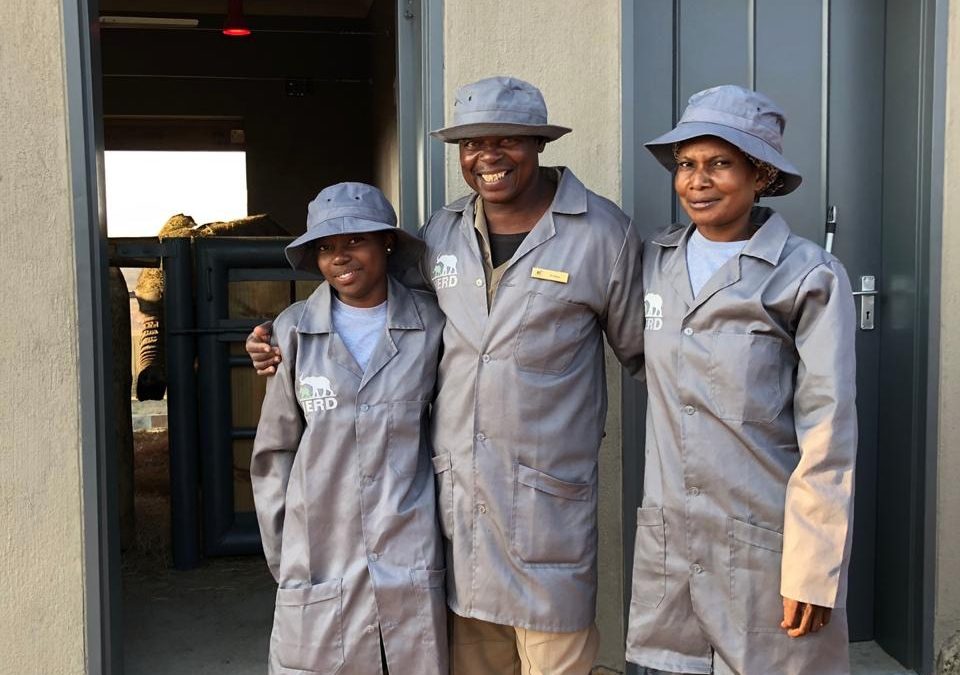 For World Veterinary Day, we are celebrating all the incredible wildlife vets who have played vital roles in our work with elephants and other animals over the years:

Dr Peter Rogers and the team at Provet Wildlife Services, Dr Johan Marais of Saving the Survivors, and Dr Ben Muller who accompanied Adine and Khanyisa after her rescue and transport to HERD. Since the arrival of the very first orphan in our care, Jabulani, in 1997, and the rescued Jabulani herd of elephants’ arrival in South Africa, in 2002, Dr Rogers has been one wildlife veterinarian who has been by our side continuously.

A cherished member of our human herd, his kindness, dedication and expertise have made him truly invaluable to us and a great friend. Dr Rogers is a man who even in the adrenaline and stress of trying to save the lives of fragile elephants or rhinos, is able to find the humour, the lightness, the silver lining, and make everyone around him feel at ease, when ease is needed most.

Dr Peter Rogers is a man without bravado, and yet so accomplished in his field of veterinary science. He is a hero to many of the animals who have needed his care and attention over the years, but there have also been losses, touch-and-go moments, and a few literal back-breaking experiences.

Still, Dr Rogers continues to put the health, lives and wellbeing of wildlife first and foremost, because of his love and passion for the animal kingdom and wilderness. He was there for the very beginning of our journey, and we are so grateful for his company as we continue on this road to help rehabilitate displaced and orphaned elephants.

Find out more about our courageous wildlife warrior, Dr Rogers in our interview below!

How long have you been a veterinarian and working with the Jabulani herd of elephants for?

I qualified as a Wildlife Vet in 1984 and have been working with the Jabulani herd since they arrived from Zimbabwe in 2002.

What have been some of your most memorable moments working with the herd?

Most of the time I’m called out for things like abscesses and vaccinations. But there are some interesting times! One of the remarkable moments was when the Jabulani herd came out of Zimbabwe when the war veterans were rattling the gates and were likely to have killed the elephants. We took the herd out through the sugar cane fields at the back of the farm where they were living, and out to the polo field ground at night, and darted them with a tranquiliser to load them onto the truck, all in the pitch black, before they could be slaughtered.

Being involved in the hand-rearing of orphan, Jabulani after he was rescued was incredible too. We went through many tough times with trying to rehabilitate and reintegrate him, but looking at him now, it was well worth it all.

Do you have a soft spot for any of the Jabulani elephants?

I have a soft spot for Jabulani, he is my “hart se punt,” as we say in Afrikaans, and funnily enough he’s the only elephant in the herd that actually likes me. I can get close to him without any issue. I would have thought he’d be the one who would fear me the most, as a veterinarian who has had to treat him over the years.

You suggested the name for Khanyisa, the local word for “sunshine/light”. What does Khanyisa represent for you?

When Khanyisa came in she was such a ray of sunshine for all of us, she was such a character, and she still is. She has done really well, she’s a little fighter.

How often do you treat animals that are victims of snaring?

Unfortunately we treat quite a lot of animals who have been victims of snaring, usually it’s animals that stray from protected areas, like elephants who have no respect for fences. When they leave protected areas. they often get snared. Also it happens a lot to animals that go under fences like warthog, who make their holes and scurry through to be caught by snares that poachers set for them. Wild dogs and lions are also animals for whom snares are a problem.

What type of animals do you work with mostly?

I work a lot with cheetah, elephant, and rhino, with dehorning.

What has been your scariest moment working with wildlife?

The scariest time on the job for me was the time a black rhino broke my back. We had woken it up from the anesthesia, after an operation and typically when rhino wake up they go absolutely ballistic and run around to try and find the person that darted them. They just go in any direction and this rhino got up and I was standing in the road and she went straight at me. She didn’t know I was there. I had to dive behind a bush and she went straight through the bush and hit me. I flew straight through the trees, and landed on my coccyx and ended up with a compression fracture in my back. But the rhino luckily didn’t turn around. I think it probably got a bigger fright than I did and it carried on running.

How has it been working with Adine and our team at Jabulani and HERD?

What’s been great about working with Adine and her team is the passion, you can actually feel it, at Jabulani or HERD. Everything goes into the care of the animals, and with the herd stables and orphanage there’s such attention to detail. There’s perfectionism involved in there. The carers really take pride in their work, and are very professional. You just have to take a look at the elephants themselves, and that tells you a lot, because these animals are so calm. If they were stressed in any way, they would never exhibit this kind of behaviour. The carers are also so calm and walk with the elephants, guiding them just by talking, every day.

With Adine, she throws everything into the work. With every orphan that comes in, she does her best and then more than her best, to get the little animal through, and we all know how daunting it is to get these little calves through, whether elephant or rhino (Adine’s previous work also included rhino rehabilitation), but that never puts her off.

What is it like working with elephants compared to other animals?

What’s nice about working with elephants is two things, firstly they are very clever, and working with the Jabulani elephants this has become very apparent to me. Also practically, on the job, elephants react very well to the anesthesia, they handle it well, so it’s a bit easier to help them. The elephant is probably my favourite animal.

What do you do in your spare time to relax?

I’m always on call, but I like to go to the Kruger National Park for the day, which may sound crazy as I’m working with animals all the time, but Kruger is the most magnificent place. It doesn’t matter if I don’t see one animal, but just to see the beautiful trees and to get away, that is what I like to do in my spare time.

What inspires you to do the work you do as a wildlife veterinarian?

I think when one goes into the veterinary profession, you must realise you aren’t going to make any money in it, but then a lot of people work their whole lives until they’re 60 to then retire and start living. Luckily I started living my life from the beginning, as a vet, doing what I would have done in my retirement, what I want to do, and I have pursued my hobby at the same time, my hobby being wildlife. I’ve been very fortunate in that scenario. A passion for animals and saving their lives and helping them is vital.

Can you share any anecdotes about your time working with the elephants?

When Fishan broke his leg, we carried out a standing sedation with him, using BAM, and Dr Johan Marais was there with his x-ray machine, to take x-rays. Fishan was very sore and a bit grumpy and while we were doing the standing sedation, I held a cassette for the x-ray against his leg and obviously he was still very sensitive there and he took his trunk and he just swatted me. I went flying! Obviously there was a lot of mirth in the team who had a good laugh at me.

How do you cope with losing an animal in your care?

I’ve been qualified for 37 years, and we’ve lost animals along the way. In the beginning, I took it personally, I thought I didn’t have much experience, perhaps, but in the last 30 years, I just think that as long as you’ve done your best, even though it’s very sad every time, nobody can ask for more than that. Maybe the vet next door could have done better, but as long as you know in your heart that you did your best, nobody can say anything to take that away.

Do you have any advice for any budding veterinarians?

As we all know, it’s very difficult to get into veterinary science, but it’s never too late. I know people who have gone into it in their 30s. You have to just carry on and fight it and not give up. Get more degrees and credits, to try your best to get into the veterinary faculty. These days, it’s becoming a lot more competitive, and harder than when I was still studying, but if you are determined to do it you can do it.

It just takes extremely hard work and dedication and there’s a lot of sacrifice involved. I remember not being able to go to weddings and hockey matches and holidays and long weekends. You have to be absolutely focused and passionate and committed about what you want to do. 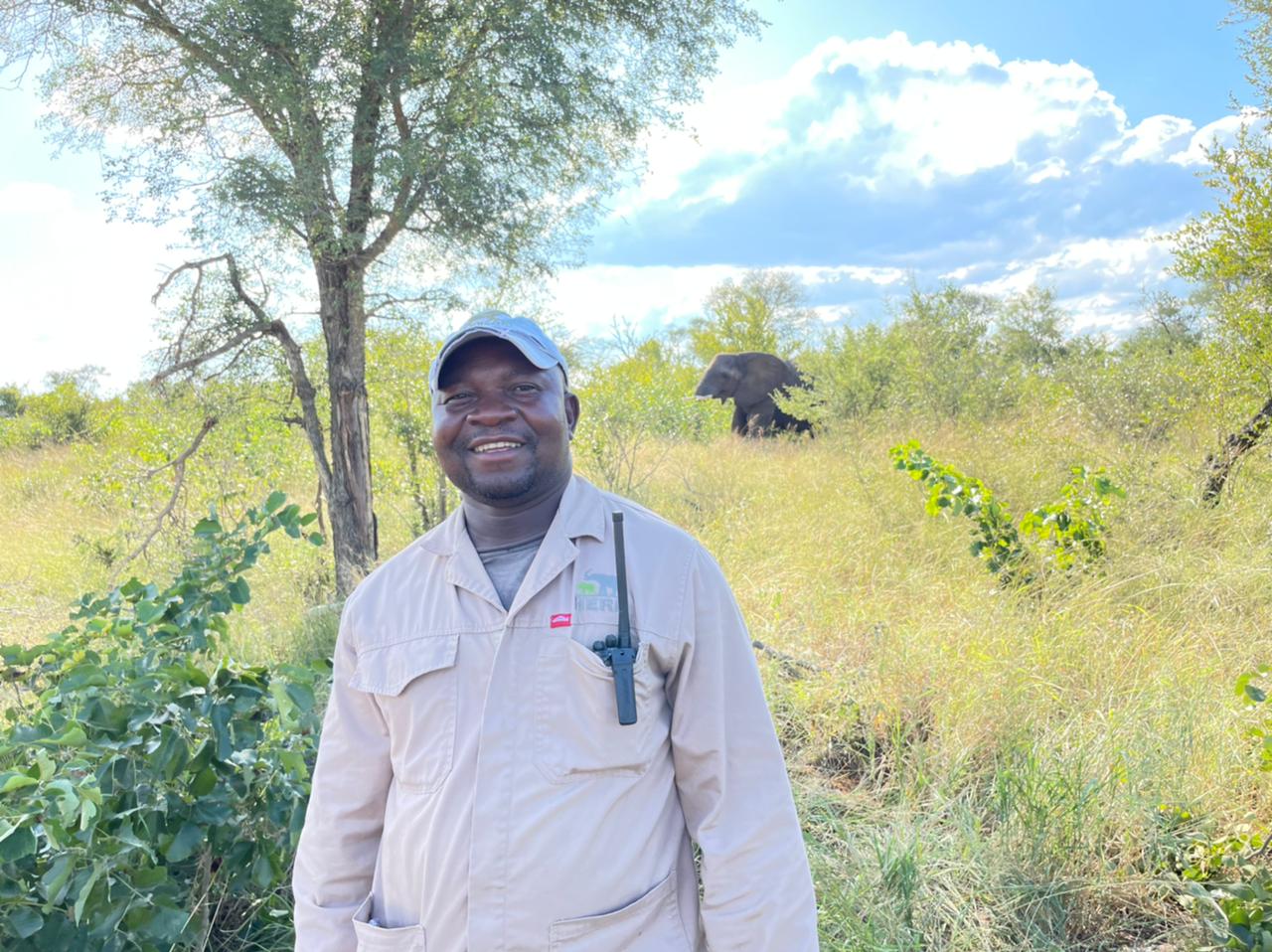 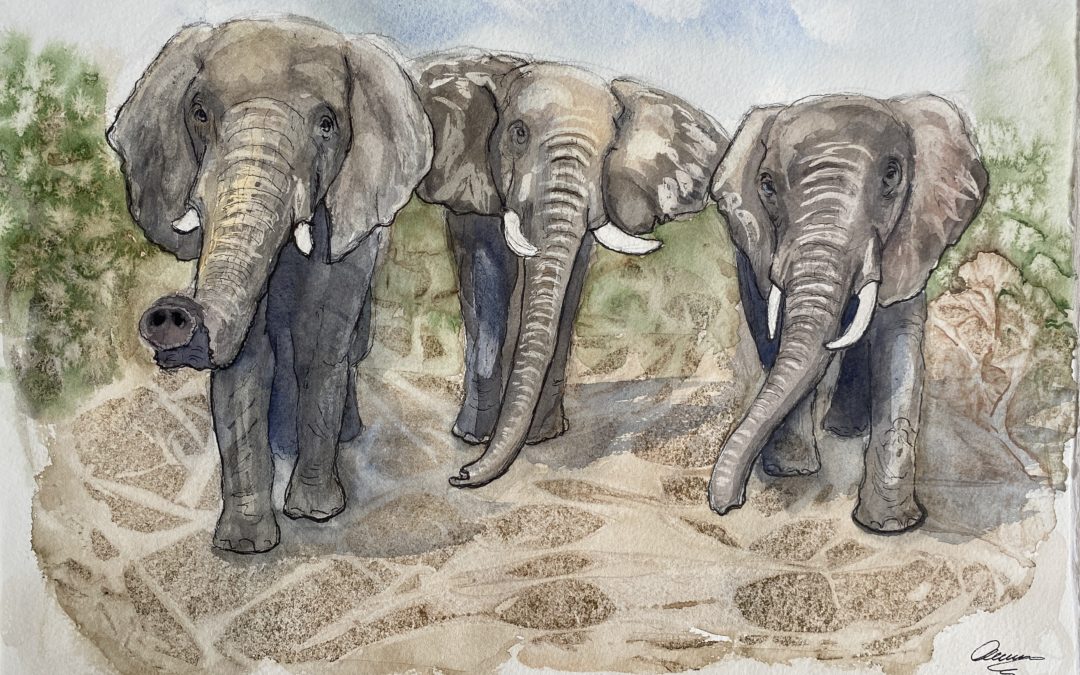 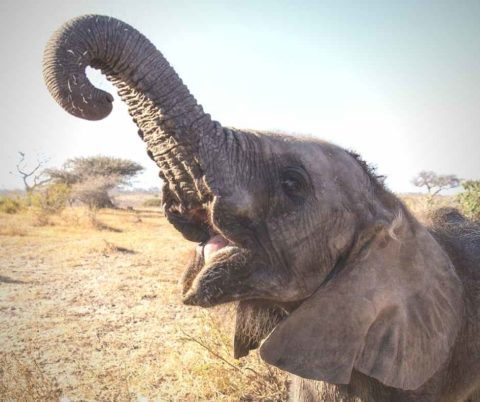